Renton is married to Merilyn and has three daughters, and nine grandchildren. They live in the city of Porirua in New Zealand, about 16km north of the capital city of Wellington, which is located right at the bottom of the North Island. They home schooled the girls for fourteen years.

Renton is a self-employed builder, who has worked for himself for around thirty five years. He directed Scripture Union summer camps for a decade, taught Bible classes for years, and for nine years was involved in running two youth groups.

This is the camp site at Titirangi Bay, ‘Fringe of Heaven’ as it’s called. It is found at the end of a 50km gravel road, 35km from the nearest shop, at the head of the Marlborough Sounds, South Island, New Zealand. It was the site of a fantastic Scripture Union, Inter-School Christian Fellowship summer camp for many years. Renton directed six camps here. Around 45 campers would enjoy seven days of sun-bathing, swimming, boating, fishing, tramping, living in tents, and Bible teaching – and exercises on the beach at 7am in the morning!

Renton is active in publicly promoting the Biblical worldview and challenging  secular culture. In this regard he has been a prolific writer of letters to papers, with many hundreds of letters published. He has written an eight page piece on writing letters to print media which you can find on this website. A sample of his letters are also on the site. Things have changed in the last few years with the advent of the widespread use of Social Media, and papers changing in character, so not much letter writing is done now. 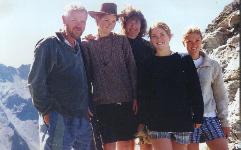 He has recently (2020) released a thirteen part video teaching series ‘Worldviews in Conflict: Christianity vs Humanism’ which is available via download through the website worldviewsonline.com

He has had articles published in a variety of Christian publications including: Creation Magazine (Creation Ministries International), Stimulus, Challenge Weekly, Reaper, and Apologia.

He presented a paper at the Stimulus sponsored Conference Making Crime Pay on Crime and Punishment, entitled ‘What of Biblical Law?’ See Stimulus Vol 2 Issue 3, 1994.

In September 2001, Renton launched what was (and still is) apparently the first and only radio station in the world  – ‘GenesisFM‘ – dedicated to promoting informed and provocative discussion on the question of origins and Biblical worldview issues, all from a Creation perspective. GenesisFM has now been broadcasting on 88.1fm to Porirua, 24 hours a day, for nineteen years.

He has four times stood as a candidate for the New Zealand Parliament. In 1999 he was only the second New Zealand parliamentary candidate ever, to use a personal radio station as a means of getting his message to the public.